Contra Dennett II: The Crusades, the Inquisition, and all that

Last week, I argued that Dan Dennett’s Breaking the Spell amounts to an attack on a straw man, “Religion,” an amalgam of what he calls “an unorganized set of dozens or hundreds—or billions—of quite different possible theories.”

Dennett is right in noting that many of these theories are vague and incompatible, and it would be a mistake to treat them all as equally valid. (Another reason believers should be on guard against relativism and syncretism, which result in religious absurdities at which skeptics rightly scoff.)

His straw man stuffed, however, Dennett is determined to beat the hay out of him. His argument is that in weighing up the pluses and minuses of Religion, it turns out that the phenomenon has been a net negative to human progress. There’s nothing even remotely scientific in Dennett’s method here, and he relies on stringing together a series of loaded associations without seriously exploring what his examples actually prove.

END_OF_DOCUMENT_TOKEN_TO_BE_REPLACED

Nathan’s post on Mel Gibson’s The Passion of the Christ last year generated a lot of discussion and ended with an intriguing question:  “Why does Pilate always get so much empathy from us?”

It would be easy, at this point, to start tossing around charges of anti-Semitism, charges which would allow us to feel a certain measure of moral superiority over those less enlightened than ourselves.  Then we could pray like the righteous Pharisee, “God, I thank thee that I am not like other men, extortioners, unjust, anti-Semites like Mel Gibson over there” (Lk 18:10).

Throwing around such charges is a way of doing precisely the same thing that blaming the Jews for the crucifixion once did:  deflecting guilt from ourselves.  I would suggest a far more troubling answer to the question, “Why do we empathize with Pilate?”

Because Pontius Pilate is the character in the Passion who is most like us.

END_OF_DOCUMENT_TOKEN_TO_BE_REPLACED

Of Gods and Men

It takes a lot to leave me speechless, but the French film Of Gods and Men, which tells the story of the 1996 assassination of seven Trappist monks by Islamic extremists in Algeria, did just that this weekend.  It may well be the best religious film I’ve ever seen.

Like the 2005 documentary Into Great Silence, the film allows the Trappists’ monastic lifestyle to unfold simply and quietly.  We see the monks at prayer, tending their garden, making honey, attending patients in their small clinic.  The film makes great use of silence and of the rugged Algerian countryside to allow us to feel the elemental beauty and humanity of the Trappists’ way of life.

We also feel the humanity of the Algerian villagers who live around the monastery.  As we watch the elderly physician Br. Luc tending a child’s wound, then rummaging for shoes for a mother and her daughter, or another of the monks helping a village matron address an envelope to her son in Paris, one has the sense that the relationship of monastery to village we’re seeing might as easily be unfolding in medieval Europe as in Muslim Algeria; it touches on timeless parts of being human—sickness, celebration, making a living, family, death, elders complaining that the world has gone mad, falling in love.

END_OF_DOCUMENT_TOKEN_TO_BE_REPLACED 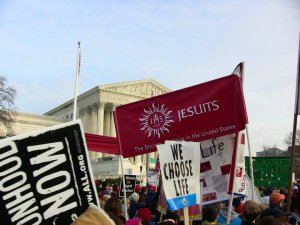 Today’s post, my last in this series, is also likely to be the most controversial.  I nonetheless hope that any discussion it engenders can still be reasonable.  I decided not to post this series during an election season because the emotion and loyalties campaigns arouse make such discussion difficult.  Voices in the Catholic media begin to treat the Church’s social teachings as ammunition to be used in defense of their predetermined party of choice rather than looking to the Church as a genuine guide.  Sometimes the loyalty Catholics show to their candidates and parties borders on the idolatrous.

I’ve argued that for both theological and practical reasons, Catholics should prioritize opposition to abortion above other political issues.  Today I’m going to get a little more specific in discussing what I think are the real world consequences of this argument.  When we get to the point of concrete political decisions we have to be a bit more specific with our terms than I have been in my earlier posts.  So when I say that I think abortion should be “issue number one” for American Catholics, I mean specifically that working to weaken and overturn Roe v. Wade must be our top priority.

There are lots of other ways to combat abortion, after all, such as volunteering in crisis pregnancy centers or subsidizing adoption, all of which are praiseworthy—but none of which are a substitute for overturning Roe.

END_OF_DOCUMENT_TOKEN_TO_BE_REPLACED

The observations of O’Brien and Bottum raise two related questions:  first, should opposition to abortion be treated as constitutive of Catholic identity?  Is it really that central to our faith?  Second, should Catholics make abortion issue number one politically?  Should it be prioritized above other issues?  I’ll look at the first, more theological question, today and the second in two posts to follow. END_OF_DOCUMENT_TOKEN_TO_BE_REPLACED

I tried to summarize some of the ideas from earlier discussion here on Whosoever Desires.  (The original posts are here and here.)

Do you remember “Opposite Day” from childhood?  “Sure, I’ll give you half my candy bar if you give me your fruit Roll-Up…just kidding: it’s Opposite Day!”

When adults play Opposite Day, the results are far more sinister.  This year the Nobel Prize Committee played Moral Opposite Day by awarding their prize for medicine to Dr. Robert Edwards, the inventor of in vitro fertilization.  A Vatican official quickly condemned the Committee’s actions, and rightly so.

The Church’s objections to in vitro fertilization are perhaps not as well known as they should be:  the procedure turns reproduction into a technical process instead of an act of love and involves the mass-production of embryos, the majority of which will be discarded when they are no longer deemed useful.  Because the procedure’s rate of success is low, a larger number of human embryos are created than what are normally needed, and those that are deemed defective or prove to be “unnecessary” are killed or frozen.

A more thorough and expert discussion of the problems with in vitro fertilization, as well as the morally acceptable alternatives to it, can be found on the USCCB website.  However, even a brief consideration of all that the procedure involves should be sufficient to understand how it results in the reduction of human life to a commodity.  Any time we find ourselves applying the adjective “unnecessary” to a human life, we have already entered a brave new world of moral horror.

END_OF_DOCUMENT_TOKEN_TO_BE_REPLACED

An interesting discussion on religion and violence 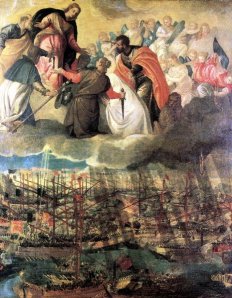 To mark the 439th anniversary of the Battle of Lepanto, I thought I’d alert our readers to a discussion taking place on Cynthia R. Nielsen’s interesting blog Per Caritatem on “Violence and Christian Holy Writ.”

I contributed a short piece on Rene Girard based on our own discussions of Girard here on Whosoever Desires.  (My own piece won’t come up for another few weeks, but the others’ contributions are even more interesting.)