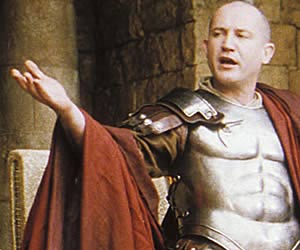 Nathan’s post on Mel Gibson’s The Passion of the Christ last year generated a lot of discussion and ended with an intriguing question:  “Why does Pilate always get so much empathy from us?”

It would be easy, at this point, to start tossing around charges of anti-Semitism, charges which would allow us to feel a certain measure of moral superiority over those less enlightened than ourselves.  Then we could pray like the righteous Pharisee, “God, I thank thee that I am not like other men, extortioners, unjust, anti-Semites like Mel Gibson over there” (Lk 18:10).

Throwing around such charges is a way of doing precisely the same thing that blaming the Jews for the crucifixion once did:  deflecting guilt from ourselves.  I would suggest a far more troubling answer to the question, “Why do we empathize with Pilate?”

Because Pontius Pilate is the character in the Passion who is most like us.

Pilate is educated, Western, professional; he is not a sociopath, not some oriental despot, neither particularly poor nor fantastically rich; above all, he is no religious fanatic.  The purity laws of the Jews, their concerns about idolatry, seem as foreign and irrational to him as they do to us.  His concern is not for God’s honor but for, to borrow a phrase from the Constitution, domestic tranquility.  He wishes the Jews would disagree without being so violently disagreeable.

Pilate is not bloodthirsty.  Nor is he indifferent to justice.  If given the choice, he would prefer that the innocent not die, but neither truth nor justice are his highest priorities.  He is more concerned with keeping the peace and keeping his job.  Pilate fears the passions of the crowd and the opinions of his superiors.  He is a canny enough politician to know that it is best to stay the middle course.  Even if the middle course is immoral—having Jesus beaten before he is released (Lk 23:13)—it is still moderate and centrist.

Pilate’s actions in the Gospels even have a way of bridging differences.  He becomes friends with his onetime rival, Herod.  In Luke’s Gospel, Herod is spiritual but not religious.  He is curious about Jesus, not wishing him any harm at first, even eager to see him.  But when he realizes that there is no religious novelty in Jesus, no quick fix, no sign; when the spiritual exoticism has worn off and Herod sees in Jesus only the prospect of unpopular moral commitment, he has no use for him.

Pilate recognizes no absolute standard of truth.  “What is truth?” he asks (Jn 18:38), a question repeated in our own day often in such a tone as to imply that to answer would be offensive.  Pilate, like so many of us, faced with perplexing truth claims and passionate religious differences, weighed down with a history of violence and error, takes refuge in a relativism that seeks simply to tolerate.  Pilate has a COEXIST bumper sticker on his car.

The problem with coexistence, however, is that it occasionally means sacrificing those who step too far out of the social order, those whose existence threatens our coexistence, whether they be innocent or not.  Coexistence cannot tolerate one who says that coexistence is not enough, that there is a right and a wrong way of existing.  Tolerance cannot bear one who says, “I am the way, and the truth, and the life; no one comes to the Father, but by me” (Jn 14:6).  Jesus came preaching love, not tolerance.  The Gospels would have had a very different ending if his command had been, “Tolerate one another as I have tolerated you” (Jn 13:34).

We are like Pilate.  We all desire to be thought of as moderates; we do not like our religion too extreme; we get nervous at words like “truth.”  We know that such words have a way of stirring conflict, and we want peace.

I once had a conversation with a well-educated Catholic gentleman about what it takes to get into heaven, and he kept coming back to the idea that all it really takes is being a “decent” person.  Such a belief is one of the tenets of “moralistic therapeutic deism,” America’s default interdenominational creed.  We are mostly decent people, which means we are mostly capable of functioning in society without doing each other more than average harm.  I would bet, however, that the crowd that cheered Jesus on Palm Sunday and turned against him on Good Friday were mostly decent people.  Holy Week reminds us of just how awful the no-more-than-average-harm decent people do really is.  Pontius Pilate was no monster; he was an entirely average man, faced with an impossible dilemma:  allow an innocent man to die or risk insurrection.  And yet, it is Pontius Pilate who orders Jesus to be killed. 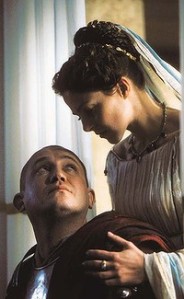 We can sympathize with Pilate because he looks for compromise, because he is the Gospel’s most pragmatic character.  We fear absolutes, and on Good Friday Jesus offers only the absolute.  On Good Friday the prospects of a harmonious earthly kingdom are stripped away, like Jesus’ garments at the tenth station.  All that remains is God, all that remains is the truth, and everything else is gone.  If Pilate were to side with Jesus, he would be choosing the truth—and that’s it.  Nothing more.  In fact, he would be surrendering happiness and harmony, prosperity and peace.

But, surely, God wants us to have all those things, we say.  Surely, God would not ask us to give up what we think we need for happiness.

On Good Friday, Pilate meets a God who offers us nothing but God.  And he balks.

And we too are so in the habit of balking that we no longer see doing so as evil; in fact, we dress it up with names like tolerance and moderation and decency.  Pilate’s actions in the Gospel are no less blameworthy than those of Caiaphas or Judas or the crowd, but we empathize with him because we ourselves would mostly prefer to send Jesus out of sight to be crucified and then post guards around the tomb.

This entry was posted on Monday, April 18th, 2011 at 5:20 am and is filed under film, Heaven, Jesus, Modernity, Moralistic Therapeutic Deism, Morality, Postmodernity, Society of Jesus (Jesuits), Tolerance, truth, violence. You can follow any responses to this entry through the RSS 2.0 feed. You can leave a response, or trackback from your own site.