Fish Fridays are back for the Catholics of England and Wales, or at least they will be come September.  The bishops conference of those countries announced last week that Friday abstinence from meat will once again become obligatory for their flock starting September 16, the first anniversary of Pope Benedict’s visit to the U.K.

Some sociologists have argued that dropping meatless Fridays in the 1960s was a pastoral error on the Church’s part.  Meatless Fridays, so the thinking goes, were a significant marker of Catholic identity, and the rapid disappearance of so many such markers contributed to the disastrous erosion of Catholic life and practice which began in the late 1960s.

Still, even if one accepts that suddenly dropping an ancient practice such as meatless Fridays was a mistake, it doesn’t necessarily follow that the practice should be revived today.  Nonetheless, it seems to me there are significant theological reasons to praise the bishops of England and Wales for their gutsy decision.  Perhaps we might even learn something from them on this side of the pond.

END_OF_DOCUMENT_TOKEN_TO_BE_REPLACED

The Planets Can’t Love: A Homily

A homily given at St. Ignatius Church 22 May at 10 AM Chestnut Hill, Mass.

During John’s account of Jesus’ passion, Pontius Pilate infamously asks, “What is truth?”  It’s a question that is still very applicable in our times, just as it was in Pilate’s. What is truth?

We tend to think of truth along the terms set out by science. You scientists in the congregation will know better than I, but it seems that in science, truth starts out as a hypothesis. The hypothesis stands as the truth until further evidence comes along to modify or even overturn that once held truth.

For example, until very recently it was thought that only 10-20 percent of the stars in our galaxy had planets orbiting them. Now, thanks to scientific observation, scientists believe that nearly all of the major stars in the galaxy have at least one, and perhaps two major planets, planets the size of Jupiter and Saturn, in their orbits. This means that in our galaxy, the planets now outnumber the stars. This discovery represents quite a drastic change in the way we think about our galaxy. We knew the galaxy was chock full of stars, just look up into the sky at night in a dark place and see the millions of bright points of light. Now, thanks to this most recent discovery, the galaxy just got a bit more crowded, as it seems that each of those stars now has a couple of giant planets in its orbit. The truth we once knew is displaced by a new truth based on scientific observation. Perhaps this new truth will be displaced in a few years as scientists sharpen and heighten their abilities to peer into the universe. Truth, then is really something to hang onto very lightly since it seems that we will have more data in the future and a new truth will reveal itself. END_OF_DOCUMENT_TOKEN_TO_BE_REPLACED 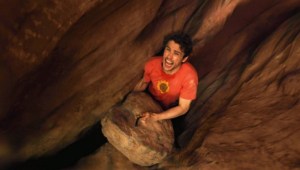 In the Sermon on the Mount, Jesus instructs his disciples, “If your right hand causes you to sin, cut it off and throw it away” (Matt. 5:30).

Last week, however, I watched a movie, 127 Hours, which is about cutting off one’s arm.  Literally.

James Franco stars as Aron Ralston, a mountain climber who becomes trapped in a remote canyon in Utah, his arm pinned underneath a boulder.  After 127 hours in the canyon, facing dehydration and death, Ralston cuts off his own arm with a rather dull substitute for a Swiss Army knife.  First he has to break the bone, since the knife isn’t sharp enough to saw through it.  Yes:  ouch.  Or, as a delirious Ralston puts it while videotaping what may turn out to be his last moments, “Oops.”

The movie is not religious, but nonetheless contains a few good metaphors for the spiritual life.  The point of Jesus’ hyperbole in the Sermon on the Mount, for example, is that when it comes to doing good and avoiding evil, the stakes are higher even than life or death.  Ralston finally resorts to cutting off his arm after 127 hours—though we’re led to believe that the thought occurs to him soon after he’s been trapped—because his only other alternative is death.  More than a few conversion stories have begun in similar fashion, as when the alcoholic only sobers up after finally hitting rock bottom.

END_OF_DOCUMENT_TOKEN_TO_BE_REPLACED

Homily for the 4th Sunday of Easter, Year A

For the 9:30 am crowd at St. Paul’s in Cambridge on Good Shepherd Sunday and the World Day of Prayer for Vocations:

All of Jesus’ words reveal him to be a keen observer of the natural world: we hear much in the Gospels about the growth of plants, the relative dimensions of camels and needles, the location of schools of fish, and—in today’s case—the behavior patterns of sheep.  Jesus draws our attention to one behavior in particular: after the “[shepherd of the sheep] has driven out all his own, he walks ahead of them, and the sheep follow him because they recognize his voice.”

“They recognize his voice.”   Jesus seems to have noticed, two thousand years ago, what animal behaviorists would nowadays call “imprinting.”  Perhaps the most familiar case of imprinting involves ducks rather than sheep.  As soon as a duckling hatches, it looks for its mother, whom it identifies instinctively and follows unswervingly. For the sake of survival, a duckling must be able to pick its mother out of a line-up of other ducks.  Hence, it is essential that ducklings spend the first hours of life in the company of their mother.  Otherwise, they attach themselves to pretty much anything that moves—a dog, a rubber ball or, in the worst case, a predator.  The ducklings follow whatever figure is first “imprinted” on their brains.

Returning to the example of the Gospel, we might say that Jesus’ identification of Himself as Good Shepherd suggests that becoming a sheep of his flock, becoming his disciple, is something like becoming “imprinted” with his person. END_OF_DOCUMENT_TOKEN_TO_BE_REPLACED

Homily for the 3rd Sunday of Easter, Year A

Happy Mother’s Day.  As I’m sure y’all know, though Mother’s Day is important in the rhythm of family life, it is not a liturgical holiday.  The consequence is that the liturgical readings  don’t exactly follow a Mother’s Day theme.  Happily, we never have to go too far below the surface of the Gospel to find something relevant to the mystery of Christian motherhood.

Today’s is no exception.  It’s a little known fact, but there are not a few Scripture scholars who suggest that the unnamed companion walking with Cleopas on the road to Emmaus was his wife. END_OF_DOCUMENT_TOKEN_TO_BE_REPLACED

Retaining Sins: Responding with Christ to the Killing of Osama Bin Laden

Let’s start with John 20:19-23, it’s the passage that precedes Thomas the Doubter’s encounter with our Risen Lord. In my beat up RSV version it reads like this: “On the evening of that day, the first day of the week, the doors being shut where the disciples were, for fear of the Jews, Jesus came and stood among them and said to the them, ‘Peace be with you.’ When he said this, he showed them his hands and his side. Then the disciples were glad when they saw the Lord. Jesus said to them again, ‘Peace be with you. As the Father has sent me, even so I send you.’ And when he had said this, he breathed on them, and said to them, ‘Receive the Holy Spirit. If you forgive the sins of any, they are forgiven; if you retain the sins of any, they are retained’.”

Now let’s jump to Mr. Bin Laden.  No doubt this was an interiorly scarred man.  Again last night I listened to the tape recording where he celebrates the deaths his plan to attack the Twin Towers caused.  Ten years later I still find it haunting.  Now the newsmen and women are reporting that this man was shot in the head two days ago, April 30, 2011.  That puts his death exactly sixty six years to the day after Mr. Hitler took his own life in a Berlin bunker.  No doubt similar moral tales will be told in the coming days.

But what should our response to all this be?

As far as I can say (and in truth who am I to prescribe a response?), it seems to me that we are in an odd middle ground, pulled between two poles.  On one side I feel myself celebrating death, an odd feeling to be sure.  But isn’t it understandable, I ask myself?  Isn’t it?!  I’d lived the summer of 2001 on 16th street in Manhattan considering entering the Society of Jesus.  When I saw the news that September morning I spent hours attempting to call friends I had lived with less than a month before.  Family and friends were sent to Iraq.  The terribly regular tale of suffering and meaning-making ensued in my life as it did in so many others.  Much because of this man.  I respond with anger; with pain I’d thought put away over the past ten years.  I hurt because of this man, and I’m angry at him still.  And I certainly hope the world will be a safer place with Mr. Bin Laden no longer a part of it.  But there is another pole of this story, and it’s why I wanted to start with (to center myself in) Jesus’ Easter message to us – to His disciples fearfully huddled in the upper room.

I don’t think it’s much of a stretch to characterize our beloved (I mean that word) U.S.A. as huddling behind locked doors after the events of September the 11th.  I’m just not as sure that we can safely say that we received our Lord’s twice repeated counsel: “Peace be with you.”  It’s the injunction to receive peace, the positive fullness of shalom He so desired as He wept over Jerusalem, that we are given.  That’s the other pole.

I know it’s not so simple some times, perhaps in these very minutes, to live in this other pole.  But calling ourselves Christians means being fully united with one another and with our Father’s will for us and our world.  It’s our God, in his glorified body, who breathed the Holy Spirit upon our angry, frightened, hurt ancestors who had locked themselves in that upper room.  And that Holy Spirit, in John’s words, will “teach [us] all things, and bring to our minds all that [Jesus] has said to [us].  Peace I leave with you; my peace I give to you; not as the world gives do I give to you.  Let not your hearts be troubled, neither let them be afraid” (14:26-27).

Prayers all.  For the souls of Mr. Bin Laden and all those who have been killed and wounded in his wake.  For real.

PS.  Here are links to two strong articles on this same subject, one by Fr. Jim Martin, S.J. in America, and one by a blogger named Joe Carter at First Things.  Prayers again.

PPS.  Here’s the Vatican’s response to Mr. Bin Laden’s death.  I am consoled by it: “Osama bin Laden, as we all know, bore the most serious responsibility for spreading divisions and hatred among populations, causing the deaths of innumerable people, and manipulating religions for this purpose. In the face of a man’s death, a Christian never rejoices, but reflects on the serious responsibilities of each person before God and before men, and hopes and works so that every event may be the occasion for the further growth of peace and not of hatred.”