Homily for Corpus Christi, Year A

For the good people of St. Thomas More Parish in Omaha, NE:

At heart of the Eucharist, the particular gift of God that we celebrate on this Solemnity of Corpus Christi, is the mystery of change and transformation.  Anyone who has had even a little catechism knows that Catholics believe that here on the altar bread and wine are really changed into the body and blood of Christ.  This is why we fast and genuflect and keep reverent silence in the presence of the Sacrament.

But I’d like to propose that we think of this Eucharistic transformation as just the middle in a series of three related transformations.  The Eucharistic change that takes place again and again on every altar throughout the world also hearkens back to a change that took place once for all; and it points forward to another change, the change we hope for in ourselves.

The once-for-all change that the Eucharistic recalls is none other than the central event of Christianity: Jesus’ passion and resurrection. END_OF_DOCUMENT_TOKEN_TO_BE_REPLACED

Re-Enchanting the Eucharist through Adoration

This is a small reflection I wrote for the forthcoming newsletter of C21, the on-line faith formation program of Boston College’s School of Theology and Ministry.  I thought it might be appropriate for the Thursday after Trinity Sunday–the day on which Corpus Christi is observed wherever it is celebrated as a day of precept.

I suppose my experience of eucharistic adoration is fairly typical of devout Catholics of my generation.  Being now only 32 years old, I have no personal memory of those features of pre-conciliar piety that ritualized the sacredness of the eucharist: Forty Hours devotions, Corpus Christi processions, stringent fasting requirements, a strictly demarcated sanctuary, and the exclusively priestly handling of the sacred species and vessels.  There being so little transgressive thrill at the prospect of drawing close to the eucharist, my parents had little success inducing met to serve as an acolyte at my home parish.

When I first encountered eucharistic adoration, however, I remember stepping into a spiritual atmosphere distinct from what I had known before.  END_OF_DOCUMENT_TOKEN_TO_BE_REPLACED

Contra Dennett II: The Crusades, the Inquisition, and all that

Last week, I argued that Dan Dennett’s Breaking the Spell amounts to an attack on a straw man, “Religion,” an amalgam of what he calls “an unorganized set of dozens or hundreds—or billions—of quite different possible theories.”

Dennett is right in noting that many of these theories are vague and incompatible, and it would be a mistake to treat them all as equally valid. (Another reason believers should be on guard against relativism and syncretism, which result in religious absurdities at which skeptics rightly scoff.)

His straw man stuffed, however, Dennett is determined to beat the hay out of him. His argument is that in weighing up the pluses and minuses of Religion, it turns out that the phenomenon has been a net negative to human progress. There’s nothing even remotely scientific in Dennett’s method here, and he relies on stringing together a series of loaded associations without seriously exploring what his examples actually prove.

END_OF_DOCUMENT_TOKEN_TO_BE_REPLACED

I’ve made little secret on these pages of my disdain for the crop of neo-atheists who have gotten so much acclaim over the past several years. Most of their arguments wouldn’t merit a passing grade for a high school sophomore.  (No offense intended to our exceptionally bright high school readers, especially those from MUHS.)

Nonetheless, Pope Paul VI in 1966 entrusted the Society of Jesus with the mission to make a “stout, united stand against atheism,” so I’ve devoted some time in my philosophy studies to the work of these neo-atheists.  Of the bunch, Daniel C. Dennett has a reputation for seriousness in part because he is a philosophy professor at Tufts, so I decided to review his book Breaking the Spell for a philosophy of religion class—and to share parts of my critique with you, dear readers of Whosoever Desires.

Dennett frames his book as a plea for the rational study of religion, a rather innocuous suggestion to which believers themselves should pose no objections.  I wish, in fact, that Catholic leaders would study seriously the research done by sociologists such as Christian Smith or Rodney Stark.  (Stark’s analysis disproves the common assumption that the growth of religious communities comes by loosening religious demands, when quite the opposite is true.)  Dennett claims that the only “prescription” he intends to make “categorically and without reservation” is to “do more research.”

Unfortunately, Dennett’s true agenda is revealed at the end of the book when he advocates a program of worldwide reeducation into a “historically and biologically informed” view of religion in order to combat “those who would betray our democracy in pursuit of their religious agendas.”  Such reeducation would be conducted “gently, firmly,” Dennett reassures us, but would necessarily involve depriving parents of the right to bring up their children in their own religious tradition.  Rather more than research is involved in the spell Dennett attempts to cast.

END_OF_DOCUMENT_TOKEN_TO_BE_REPLACED

Homily for Pentecost, Year A 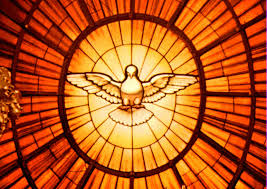 I preached this at a Mass of Thanksgiving at the Church of the Most Holy Trinity (my home parish) in Augusta, GA.

The liturgy of Pentecost is thick with images of fire.  Most notable, of course, is the reading from Acts, where coming of the Holy Spirit upon the Apostles is described as the descent of “tongues as of fire.”  We also asked the Father to send his Holy Spirit as a “flame of wisdom” in the opening prayer; we begged the Holy Spirit to “kindle in [us] the fire of … love” at the Gospel Acclamation; and, at the solemn blessing at the end of Mass, we’ll ask that the flame that emboldened the apostles “burn out all evil from our hearts and make them glow with pure light.”  Hence, I thought it might be fitting for us on this feast of Pentecost to meditate on what the fact that God reveals himself to us as a “consuming fire” means 1) for our understanding of the Church and 2) for our understanding of discipleship.

1) Let’s start with the Church END_OF_DOCUMENT_TOKEN_TO_BE_REPLACED

Society of Jesus (Jesuits) | Tagged: Church of the Most Holy Trinity, Homily, Mass of Thanksgiving, Pentecost |

Top 10 Small Pleasures of being Catholic

To celebrate the birthday of the Church last Pentecost I put up a top 10 list of things to love about being Catholic.  This year I thought I’d list my top 10 favorite sacraments… but kept getting stuck at number 8.

So, since there are still plenty of things to love about being Catholic, here’s my not very scientific list of the small pleasures of our ever-new, ever-ancient faith.

We should, after all, rejoice this Pentecost.  Imagine the list read by Dick Vitale.

10.  The feel of rosary beads.  Because sometimes the words don’t even matter.

9.  Glow in the dark rosary beads.  Because they don’t work only for the luminous mysteries.  (And prove that Jesus loves those with a weakness for kitsch, too.)

7.  Red wine.  I realize this is not an absolute requirement of the faith, but as Hilaire Belloc once put it, “Wherever the Catholic sun doth shine, there’s always laughter and good red wine.  At least I’ve always found it so.  Benedicamus Domino!” END_OF_DOCUMENT_TOKEN_TO_BE_REPLACED