Homily for the 5th Sunday of Easter, Year B: God is Greater than our Hearts

There’s a verse in today’s second reading that hints at the depth of healing that Christ makes possible: “[I]n whatever our hearts condemn … God is greater than our hearts and knows everything” (1 Jn 3:19b-20a).  Sometimes we get so used to cadences of biblical language, that it’s easy to overlook the depth of the mystery being expressed.

The first remarkable feature of this verse is surely this: it speaks of the heart as the origin of a certain kind of condemnation.  What could this mean?  Nowadays we use the heart to refer strictly to our emotions—and usually to out positive emotions.  We often oppose the “heart” to the “head,” and we describe compassionate and generous people as having “big hearts.”  In Scripture, though, the word is broader and deeper: it is the source of bad emotions as well as good; it is the seat of our cravings, the organ of our private thoughts, the storehouse of our memories.

The condemnation of the heart, understood biblically, can consequently refer to “accusations” that originate from a place deeper than our own thinking and willing. END_OF_DOCUMENT_TOKEN_TO_BE_REPLACED

The Conversion of Romano Guardini

Since the intellectually fashionable tend nowadays to declare themselves “spiritual” but not “religious,” I’m always on the lookout for 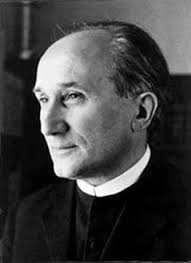 experiences that bring the two elements together.  To this purpose, I finally tracked Fr. Romano Guardini’s (1885-1968) famous account of his own conversion.  Besides being edifying, it arguably represents one of the most important ecclesial events of the 20th Century.  As a priest and theologian, Guardini deeply influenced thinkers as diverse as Josef Pieper, Walter Kasper, and Joseph Ratzinger.  I might add that the latter, in the Nature and Mission of Theology, describes Guardini’s motive for converting to the Church as the spiritual core his own ecclesiology.  There Ratzinger attributed to Guardini (at least in part) his own conviction that the “Church is the sole guarantee that the obedience we owe to the Truth is concrete.”

The following passage is set in Guardini’s university days (1905), during a vacation in Staltach, which our author describes as “a little village on Starnberger See.”  There he shared an attic apartment with his childhood friend, Karl Neundörfer.  By this point, exposure to Kantian Idealism had shattered the simple faith of Guardini’s youth.  But …

Then came a turning point.  What had drawn me away from faith had not been real reasons against it, but the fact that the reasons for it no longer spoke to me.  Faith as a conscious act had grown ever weaker and had finally died out.  END_OF_DOCUMENT_TOKEN_TO_BE_REPLACED