Homily for the 4th Sunday in Advent, Year B: A Love Beyond All Telling

Second Preface of Advent (the long prayer that leads up to the “Holy, Holy, Holy”), which the Church uses between December 17 and Christmas, mentions only two saints by name: the Virgin Mary and John the Baptist.  Presenting them as living icons of the Advent season, the prayer recalls how “the Virgin Mother longed for him with love beyond all telling, John the Baptist sang of his coming and proclaimed his presence when he came.”  In the Gospels of the last two Sundays, we already contemplated St. John the Baptist’s call to “prepare the way of the Lord,” and listened to him “sing” of the Lord’s coming with his self-denial.  But in the Gospel of this fourth and final week of Advent, our gaze turns toward Mary.  Outwardly, the transition from the stern “voice crying out in the wilderness” to the gentle virgin from Nazareth could hardly be more abrupt.  But despite all the obvious differences in appearance and activity, Mary resembles John the Baptist in the one thing necessary: in intense longing for the advent of the Lord into her life and into the world.  .  She “longed for him,” as our Preface reminds us, “with a love beyond all telling.”

I’d like to make just one observation about our Gospel today that might help us to appreciate the quality of Mary’s longing.  The observation concerns her famous response, “May it be done to me (γένοιτό μοι) according to your Word.” END_OF_DOCUMENT_TOKEN_TO_BE_REPLACED 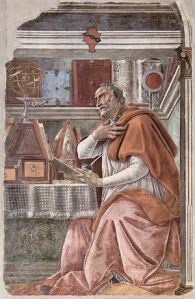 Ever wonder how one could possibly fulfill Paul’s directive to the Thessalonians to “pray without ceasing” (1 Thess 5:17)?  I have, and I’ve also been asked by students how one manages such a feat.  (Does sleeping count?)

Apparently St. Augustine wondered the same thing because he gives a nice interpretation of the phrase in today’s Office of Readings, which I thought worth sharing.  His answer struck me as rather “Ignatian,” in the sense that Ignatian discernment trains us to be attentive to our desires and where they’re leading us.  And our desire for the coming of Christ is one of the great undercurrents of this quietly joyful season of Advent.

So here he is, the ever-profound, ever-insightful St. Augustine:

[T]he desire of your heart is itself your prayer.  And if the desire is constant, so is your prayer.  The Apostle Paul had a purpose in saying:  Pray without ceasing.  Are we then ceaselessly to bend our knees, to lie prostrate, or to lift up our hands?  Is this what is meant in saying:  Pray without ceasing?  Even if we admit that we pray in this fashion, I do not believe that we can do so all the time.

Yet there is another, interior kind of prayer without ceasing, namely, the desire of the heart.  Whatever else you may be doing, if you but fix your desire on God’s Sabbath rest, your prayer will be ceaseless.  Therefore, if you wish to pray without ceasing, do not cease to desire…

We are nearly at the end of the liturgical year, with daily readings from the Book of Revelation reminding us of the end of everything else too.  Indeed, the month of November as a whole, beginning with the feasts of All Saints and All Souls, is dedicated in a special way to remembering the dead and contemplating our own eternal future.

Some people have a problem with that.

Friedrich Nietzsche, one of Christianity’s most brilliant enemies, criticizes our faith for placing too much emphasis on the life to come, thereby emptying this life of meaning and giving unhappy and unsuccessful human beings—“mutterers and nook counterfeiters”—an excuse to wallow in their own misery until they arrive in “heaven,” which in Nietzsche’s estimation seems like little more than a very long nap.

This, I’m afraid, is not one of Nietzsche’s better arguments (though to give the poor old guy a break, I don’t think it’s original to him).  Unfortunately, it has too often been taken up in one form or another by well-meaning Christians themselves.  If we spend too much time contemplating heaven, they say, we will be neglectful of our duties here on earth.  Or, as that summit of liturgical kitsch, “Gather Us In,” puts it, “Gather us in… [but] not in some heaven, light years away.”