Solzhenitsyn and the Bones of Norilsk

Every June when spring finally arrives in the Siberian city of Norilsk, the bones appear, unearthed by the thaw and washed to the city by the melting snows.  The bones are the remains of prisoners who labored in Norilsk decades ago when the city was a prison labor camp, one of the remote frozen islands of the Gulag Archipelago.  The citizens of Norilsk want to forget the grisly origins of their city.  But the bones force them to remember.

The world came to know of the horrors of the Siberian camps largely through the efforts of one man, Aleksandr Solzhenitsyn, who died one year ago today.  While some of his fiction, such as the novellas One Day in the Life of Ivan Denisovich and Matryona’s Place, is among the best of 20th century Russian literature, the work for which Solzhenitsyn will always be known is The Gulag Archipelago. Using mathematical mnemonic techniques to remember in breathtaking detail the events of his eleven years in the Soviet prison system, Solzhenitsyn – like the spring thaw unearthing the bones of Norilsk – brought the horrors of the Gulag into the light of day.  As he wrote in a prefatory note to The Gulag,

By an unexpected turn of our history, a bit of the truth, an insignificant part of the whole, was allowed out in the open.  But those same hands which once screwed tight our handcuffs now hold out their palms in reconciliation: “No, don’t! Don’t dig up the past! Dwell on the past and you’ll lose an eye.”

But the proverb goes on to say: “Forget the past and you’ll lose both eyes.”

Are we in danger of forgetting that past of which Solzhenitsyn was the principal revealer?  When recalling the years “after the shock of 1989,” Joseph Cardinal Ratzinger perceptively notes “how little was said about the horrors of the Communist gulag, how isolated Solzhenitsyn’s voice remained: No one speaks about any of that.”  That “isolated voice,” too, is in danger of fading.  How many college students today could answer if asked, “Who was Aleksandr Solzhenitsyn?”  Or even more disconcertingly, how many could answer, “What was the Gulag?”

A decade ago, Solzhenitsyn’s name was left off most lists that were then being compiled of the 20th century’s most important persons.  More alarming is that a list such as Time Magazine’s “100 Most Important People of the Century” could omit Joseph Stalin.

Russia tries hard to keep the metaphoric bones of Norilsk far below the earth’s surface.  Monuments to the Gulag prisoners are almost nonexistent.  Access to the limited extant Soviet-era archives is highly restricted.  People don’t talk about the past.  The situation in the West is not dissimilar.  Many – especially certain academic elites still cozy with Marxism – want to pretend that the horrors of the Gulag never occurred.  Others ignore them out of apathy.  In those rare instances when the past is not forgotten, it is distorted: when the city of Norilsk finally erected a statue in honor of the “builders of Norilsk,” it was not of a starving, shivering, ill-clad prisoner, but rather a bronze relief of a bare-chested, muscled man with a trowel.

Through this forgetting and distorting, we risk crafting a false world of ideas divorced from the reality of historical truth.  In so doing, we neglect Solzhenitsyn’s greatest lesson: Ideology is that which allows man to commit the most horrific evils, and ideology can only be destroyed by the truth of realism.

In The Gulag, Solzhenitsyn explains,

To do evil a human being must first of all believe that what he’s doing is good, or else that it’s a well-considered act in conformity with natural law.  Fortunately, it is in the nature of the human being to seek a justification for his actions.

Macbeth’s self-justifications were feeble—and his conscience devoured him.  Yes, even Iago was a little lamb too.  The imagination and the spiritual strength of Shakespeare’s evildoers stopped short at a dozen corpses.  Because they had no ideology.

Ideology—that is what gives evildoing its long-sought justification and gives the evildoer the necessary steadfastness and determination.  That is the social theory which helps to make his acts seem good instead of bad in his own and others’ eyes, so that he won’t hear reproaches and curses but will receive praise and honors. . . .

Thanks to ideology, the twentieth century was fated to experience evildoing on a scale calculated in the millions.  This cannot be denied, nor passed over, nor suppressed.  How, then, do we dare insist that evildoers do not exist?  And who was it that destroyed these millions?  Without evildoers there would have been no Archipelago.

Professor Adriano Dell’Asta, who teaches Russian language and literature at the Catholic University in Brescia and in Milan, has commented brilliantly on the work of Solzhenitsyn.  Dell’Asta has shown that the driving force of regimes like the Soviets and Nazis was the ideological lie, that is an idea – reinvented day after day in said regimes – that has no relation to truth.  For those who wield the ideological lie, ideology is not a form of power within reality but rather is the pretext to create a new “reality” itself which is not really reality at all, insofar as it has nothing to do with truth.  Once the truth of reality has been eliminated, it is easy to eliminate other people: just say that they are “unnatural” and not really humans. 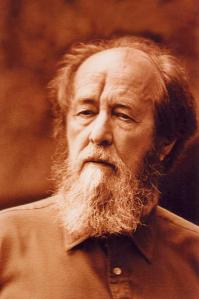 Solzhenitsyn’s great insight, according to Dell’Asta, was that the ideological lie could not be defeated by another idea, but only by the truth of realism.  The world of ideas is a world created by man.  Thus were one to combat ideology with another idea, one would remain a prisoner of the dialectic of ideas.  The only escape from idealism is through the truth of a reality that is not fashioned by man.  Solzhenitsyn destroys the ideological lie by exposing the truth of the experience of man.  He does so in his literary works by employing the form of the proverb, which is a truth that the individual himself does not invent, but rather which is handed down to him from humanity’s lived experience and which ultimately comes from a source that is higher than he.

Solzhenitsyn used the truth of realism not only to expose the Soviet ideological lie, but also to challenge the West, which he perceived to be suffering, at its roots, from the same problem as the East.  In his 1978 commencement address at Harvard University – which more than slightly irked some of the Western academe – he said,

There is a disaster, however, which has already been under way for quite some time. I am referring to the calamity of a despiritualized and irreligious humanistic consciousness. To such consciousness, man is the touchstone in judging and evaluating everything on earth. Imperfect man, who is never free of pride, self-interest, envy, vanity, and dozens of other defects. We are now experiencing the consequences of mistakes which had not been noticed at the beginning of the journey. On the way from the Renaissance to our days we have enriched our experience, but we have lost the concept of a Supreme Complete Entity which used to restrain our passions and our irresponsibility. We have placed too much hope in political and social reforms, only to find out that we were being deprived of our most precious possession: our spiritual life. In the East, it is destroyed by the dealings and machinations of the ruling party. In the West, commercial interests tend to suffocate it. This is the real crisis. The split in the world is less terrible than the similarity of the disease plaguing its main sections.

When Solzhenitsyn began to preach such things with increasing vigor, he who was once briefly regarded as a hero in the West soon was dismissed as a right-wing nationalist, as an anti-Semite, as one who held too narrowly to Orthodox Christianity.  It is easier to dismiss Solzhenitsyn than to absorb the lesson his life and writings teach us.  For if we allow our fantastical, self-fabricated worlds to be penetrated by the truth, we shall be forced to see, as Solzhenitsyn did, where evil ultimately resides:

Hans urs von Balthasar once remarked that if all of the books of the 20th century disappeared, the one book which must be preserved is Solzhenitsyn’s The Gulag Archipelago.  The reason we cannot afford to forget The Gulag and Solzhenitsyn is not just so that we do not become oblivious to where Marxism leads, but more generally – and more importantly – so that we never lose sight of the horrors of which man is capable once he is divorced from a truth beyond himself.

Someday, the bones will stop appearing in Norilsk each spring.  When that day comes, may the voice of Solzhenitsyn still be there to remind us.

This entry was posted on Monday, August 3rd, 2009 at 6:00 am and is filed under Art, education, Hans Urs von Balthasar, literature, politics. You can follow any responses to this entry through the RSS 2.0 feed. You can leave a response, or trackback from your own site.

9 Responses to Solzhenitsyn and the Bones of Norilsk